If you are eating in downtown Indianapolis, it is going to be either really bad or really good.

Nada, on west Maryland street just south of the circle, is really good. With its self-titled “hip” Mexican food and bright atmosphere, Nada is a new smash hit in downtown Indianapolis

Before the entree orders where even taken, the meal was starting off on the right foot. As is the cliche amongst a majority of Mexican restaurants, chips and accompanying sauces came to the table. The chips were perfect. They were oily and salty, which is delicious.

The guacamole that came with the chips was perfect, as it was creamy and perfectly seasoned.

While Nada does offer some alternative dishes, the main focus of their menu is tacos. The options are either getting three of one kind of taco, or mixing and matching as you please.

The Grilled Salmon was a close second. The grilled salmon was prepared well, as it was a juicy alternative to the crunchier tacos. The sauce that accompanied the salmon only complimented it.

The Shrimp Verde was also a very good taco. The shrimp was succulent. The arugula was fresh and delicious, and the avocado was ripe, so it went well with the shrimp.

The Crispy Pork Belly was the only taco that there was any issue with. While the majority of the taco were delicious, there was an option to add an egg, cooked sunny side up, to the taco. This is unadvised.

The egg seems to be more of a novelty item instead of being a practical addition to the taco. The eggs runny yolk spills out, making the taco an uneatable mess. 9/10 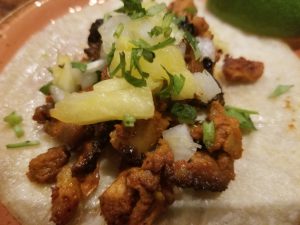 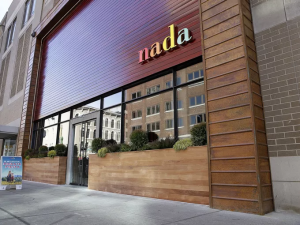