Students experiment with the Juul 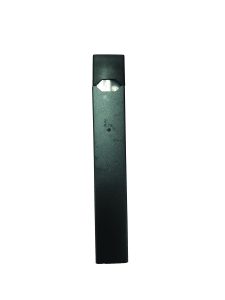 There is a new trend involving a method of simple smoking using a cigarette called a Juul.
A Juul is considered a unique alternative to smoking cigarettes that is cleaner, easier to carry around and has a smell that does not linger like a cigarette.
Possibly one of the most appealing characteristics of the Juul, to some, is the pocket size feature with nicotine juice cartridges to swap in and out.
Not everyone is a fan of the device.
“A toxic USB electronic that is terrible for your body,” junior Owen Hall said.
Juul’s cost $50.
The initial starter pack comes with the actual Juul, four Juul pods (with the liquid), the USB charger and a one year warranty.
As of Aug. 23 the new legal age to buy a Juul is 21. The previous age to buy was 18. The new rule restricts younger kids from abusing nicotine that could hurt them more in the long run.
For some kids, Juul’s are like an addiction. They bring it to school and use it whenever they get the chance.
“It’s more of a trend. Once one person has it, a lot of people just pick up on it,” Hall said.
Others agree.
“Most people just do it to try it. Like if your friend has one and they say, ‘just try it,’” sophomore Kevin Farrell said, “it is just like the vape version of a cigarette.”
Doctors are concerned about Juuls and electronic cigarettes. James Cumming, a long time pediatrician at Meridian Pediatrics, shared his knowledge about the effects of Juuls.
“Use of evils has skyrocketed for several reasons. They are seen as glamorous products by young people, they have been falsely touted as smoking cessation aids, and they are flavored so as to appeal to young people,” Cumming said.
Many kids aren’t bothered by Juuls, but there are some students who are angered by the availability to break school rule.
“I’ve walked in on like 50 people doing it [Juul],” junior Emily McGrath said.
Hall is not a fan.
“I don’t think it’s OK because it’s against school rules,” Hall said.
The health effects are close to those of cigarette because of the high nicotine.
“Use of ecigs increase the likelihood of using other tobacco products, which are known cancer causing agents, as well as chronic lung disease,” Cumming said, ”The liquid may contain nicotine, antifreeze like diethylene glycol, and cancer causing agents such as nitrosamines. One half teaspoon of this liquid can cause death in young children. Larger persons can exhibit symptoms such as vomiting, sweating, dizziness, increased heart rate, lethargy, seizures and difficulty breathing. These are symptoms of nicotine poisoning.”
Medical warnings are enough to keep some people away.
“The health concerns of a Juul is pretty bad for you,” Hall said.
When buying new JuulPods, users can purchase Pods without nicotine.
“Not all of it is bad because you can fill it up with vape juice with no nicotine,” McGrath said.
“There are probably other very harmful effects about which we are unaware. Many years of tobacco use passed before science understood that tobacco was killing millions of people. Second hand exposure from ecigs is probably also very harmful. Stay away from people using them,” Cumming said.
—Ashley Glesing, @ashleygnchslive