For a place called Hedge Row, there is a disturbing lack of rows of hedges.

Hedge Row, at the corner of Mass Ave and Vermont, is a relatively new restaurant, opening a year ago in April.

Describing itself as an American restaurant, Hedge Row has some of the classics, like burgers, but they have far more dishes that are less common for American-themed restaurants.

These dishes include curried vegetables with brown rice, pan-seared salmon, and scallops.

This restaurant, though, also has prices that are much higher than the usual American-fare restaurant. While a double cheeseburger will set you back a reasonable $17, a dish of scallops with a thai curry and jasmine rice will cost $32.

Speaking of scallops, it is the first dish that was reviewed. The scallops, for costing $32, was not as substantial as expected. The scallops were cooked fully and were delicious. The curry was appropriately spicy. Not painful, but not tame, either.

The problem is the portion. For $32, one would expect more. The bowl could accommodate more food, but it seems that Hedge Row is not taking advantage of available real estate.

The bolognese itself was well cooked, had the write portion of meat to pasta, and was only improved by the parmesan. The pasta itself was cooked perfectly.

The double cheeseburger was interesting. Unlike in most restaurants, there was no choice in how the patty was cooked.

This was because, as the waitress explained, the patty was flattened onto the grill, making it so that the patty would come out in a medium-medium well range of cooking.

The bun, while thick, tasted right for the burger. The tomato and lettuce were fresh and crisp. The cheese was real, so it tasted creamy, as it should.

Finally, the pan seared salmon appeared initially as if it were produced by a Michelin-star restaurant.

The salmon itself was cooked to perfection. It crumbled, as any good salmon would. The bok choy went extremely well with the salmon and the bacon broth only improved the taste of the salmon. 9/10 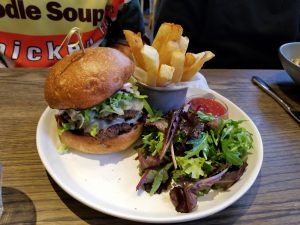 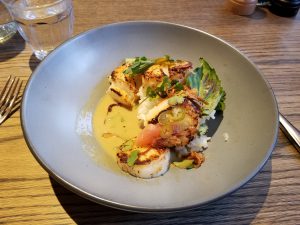 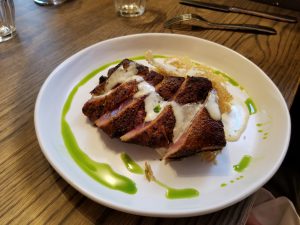